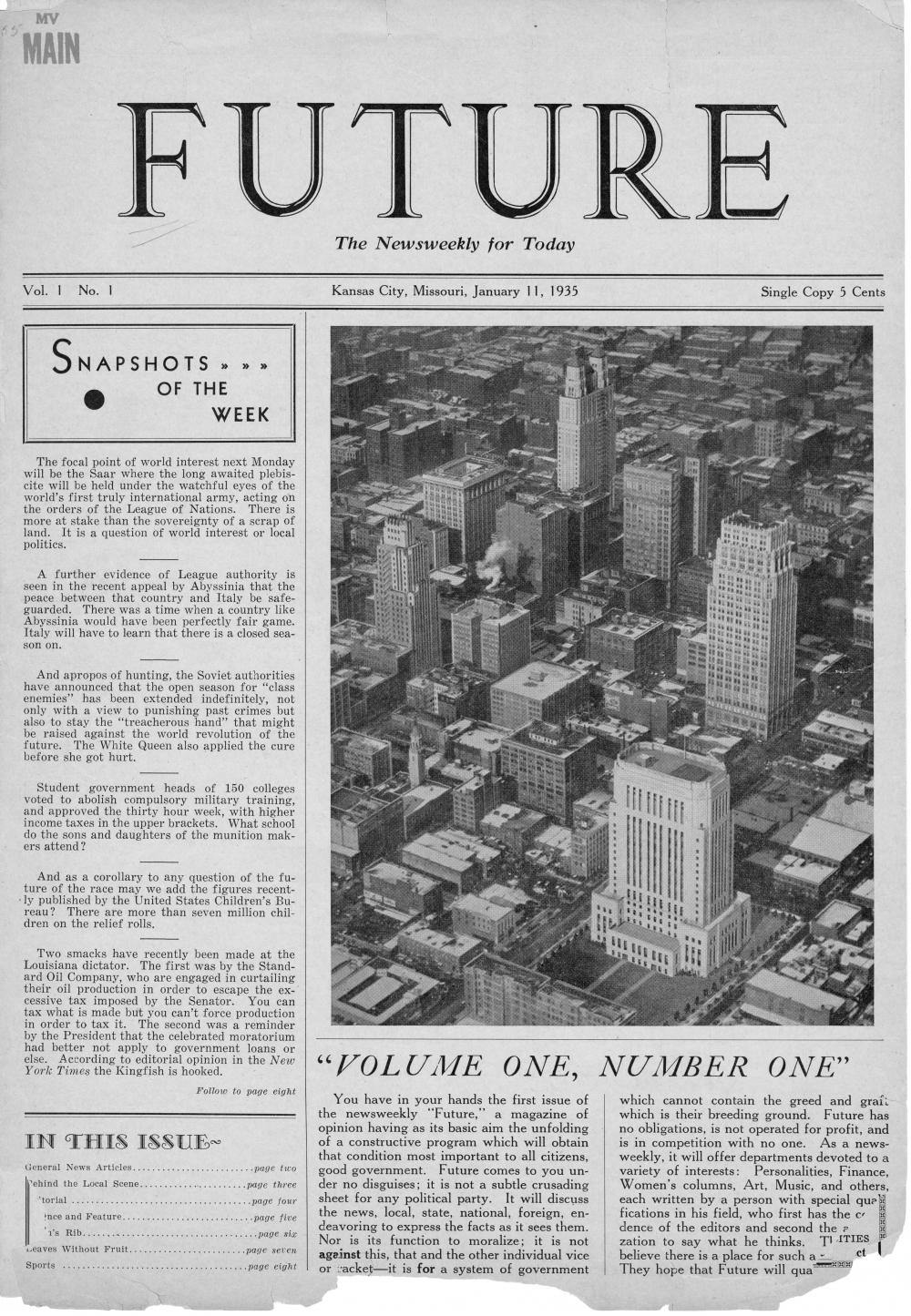 First issue of the anti-corruption, Kansas City-based newspaper, Future: The Newsweekly for Today. The front page includes a statement on the newspaper's objective, maintaining that the newspaper is not against any certain political party or vice, but that it is simply for "good government". Featured articles include: “Council Passes Cab Ordinance” (pp. 2 & 4) discussing councilman Frank H. Backstrom’s reaction to the ordinance and detailing other ordinances appropriating bond funds.; "Adult Education--A Fine Work" (pp. 2 & 6) concerning "the program of adult education going forward under the FERA, with the hearty co-operation of the city's Board of Education" and supervised by Roy Gallemore. It describes courses offered at Lincoln High School and its "sixty-three colored teachers employed, a goodly number as compared with the hundred and sixteen white teachers."; “Trivia” (pp. 2 & 6) and "Borderline Businesses Pay Most Sugar" (pp. 3 & 8) on the bombing of the Harlem Nightclub as an example of the vulnerability of semi-legitimate ("borderline") nightclubs and other businesses in Kansas City to its strong-arm tactics of organized crime through the police department. A photo of the Harlem Nightclub bombing is included.; "What, Precisely, Is a Machine?" (pp. 3 & 5) on the definition of political machines and the Pendergast machine in Kansas City fitting this definition through unofficial financing, voting fraud, etc.; "A New Administration for the County" (pp. 3-5) detailing the new administrative officials, new budget laws, and efforts to reduce the city deficit. A picture of J. W. Hostetter, Eugene I. Purcell, and Battle McCardle is included.; “NYM” (p. 4) on the National Youth Movement began in Kansas City in May 1932 with a portrait of Joseph C. Fennelly.; "May We Present Mrs. Charles N. Seidlitz" (p. 5) on Alice Richards Seidlitz "one of the founders of the Junior League of Kansas City," wife of Charles Seidlitz ("president of the Seidlitz Paint and Varnish Company"), and daughter of George Richards ("son of the founder of Richards and Conover Hardware Company"). A photo of Alice is included.; "Be Proud, Citizens!" (pp. 5 & 8) on the ironic description of Kansas City by Judge Brown Harris "as 'probably the most law-abiding city in the United States.'" Irony due to the judge's association with the Pendergast machine and "federal indictments" in relation to the Union Station massacre of Eugene Reppert ("former director of police"), Thomas Higgins ("chief of detectives"), George Rayen ("of the police motor theft bureau"), Tom Bash (sheriff), etc.; Book review (p. 7) of "Heaven's My Destination" by Thornton Wilder (author of "Our Town" and "The Bridge of San Luis Rey"), describing a scene in the book with the main character (a devoutly religious man) unknowingly eating at one of Kansas City's "bawdy houses" and experiencing other misadventures.; Also included in the newspaper are advertisements for local businesses and articles on sports, fashion, finance, cooking, music, and national and international news.