No. 24023 - Missouri ex rel. Cameron L. Orr vs. Leannah Kearns
Kearns, alias Annie Chambers, is found guilty of "conducting or keeping a bawdy house or house of assignation." Details of her establishment are included.

No. 30129 - Missouri vs. Oscar Rowe
Rowe is found guilty of giving corn whiskey to Arch Duncan as part of a larger scheme to deprive Democratic voters from voting in the 1928 presidential election.

No. 30195 - Missouri vs. John Messino
Messino is found guilty of killing traffic officer James H. Smith on June 14, 1928 after Messino and six other men stole $19,000 from Home Trust Company.

No. 34750 - Missouri vs. John Gadwood
Gadwood is found guilty of murdering Lee Flacy on March 27, 1934 "during a city election in Kansas City at a restaurant located at 5824 Swope Parkway".

No. 35160 - Missouri vs. Adam Richetti
Richetti is found guilty of murdering Frank Hermanson on June 17, 1933 as part of the Union Station Massacre.

No. 36717 - Missouri vs. Waller W. Graves
Graves is found guilty of purposefully neglecting his duties in prosecuting individuals in Jackson County openly engaging in corruption and vice.

No. 548628 - Missouri vs. Peter DiGiovanni and Joseph DiGiovanni
The DiGiovanni brothers assert that they did not commit perjury while filing a liquor license application because they claim they can not read the English language.

No. 12028 - U.S. vs. John Lazia
Lazia is charged with tax evasion for the year 1929. He was suspected to be affiliated with the Kansas City Mafia and the Pendergast Machine.

No. 12287 - U.S. vs. John Lazia
Lazia is charged with bootlegging, illegal gambling and tax evasion after losing political protection from the Pendergast machine.

No. 12584 - U.S. vs. Charles Gargotta
Gargotta is charged in three counts related to the possession and concealment of two .45 caliber pistols that had been stolen from the National Guard Armory in Kansas City, Kansas.

No. 12697 - U.S. vs. Charles Arthur Floyd and Adam Richetti
The defendants are charged with the theft of an automobile in connection with the Union Station Massacre.

No. 12698 - U.S. vs. Richard Tallman Galatas, Herbert Allen Farmer, et al.
The defendants are charged in a conspiracy of aiding Vernon C. Miller and others attempting to free Frank Nash from police custody during the Union Station Massacre.

No. 12777 - U.S. vs. Adam Richetti
Richetti is charged with assaulting state and federal officers and attempting to free Frank Nash from custody as part of the Union Station Massacre.

No. 14573 - U.S. vs. Charles Carollo
Carollo, aka "Charlie the Wop," is charged with perjury in connection with his application for naturalization as a United States citizen.

No. 14639 - U.S. vs. Charles Carollo
Carollo, aka "Charlie the Wop," is charged with income tax evasion in the years 1935-1939 with income from smoke and cigar shops, gaming and gambling operations, casinos, liquor distributors, and nightclubs and bars.

Cases were the defendants are charged with the possession and/or sale of opium, marijuana, cocaine, and/or morphine. 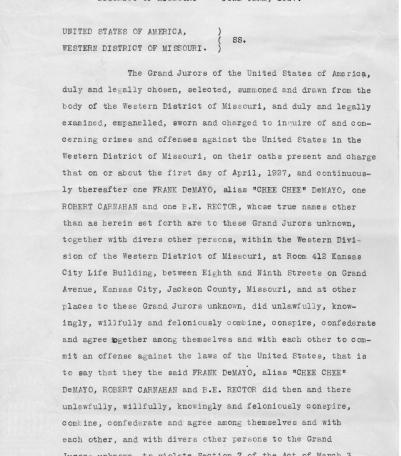 Indictment for Criminal Case No. 7988: United States vs. Frank "Chee Chee" DeMayo, Robert Carnahan and B. E. Rector, defendants. The defendants are charged with illegally allowing the bottling of distilled spirits and stamping them with stamps "purporting to be engraved strip stamps issued by the United States Government" in an office at the Kansas City Life Building. The document specifically mentions a sale to Jason Kominakis in Omaha, Nebraska, of 24 pint bottles of whiskey bearing counterfeit stamps and purporting to contain "Old Grand Dad" whiskey bottled in Kentucky.