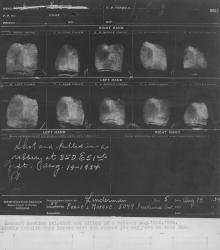 Fingerprints for Lemuel Hawkins, Inmate #39929, after he was shot and killed in a robbery on August 19, 1934. The fingerprints were recorded by Poole's Morgue at 5049 Indiana Ave, Chicago. Hawkins was sentenced to two years in the U.S. Penitentiary at Leavenworth after being convicted of violating the National Motor Vehicle Theft Act.