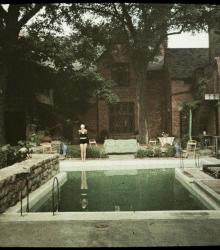 Mary Rockwell Hook once described a troubling scene from an early period in her architectural career. In Paris, where she was a student at the Ecole des Beaux-Arts, she was forced to run to a waiting taxi and dive in to avoid being drenched by a mob of disgruntled male students pursuing her with water buckets. While confronting gender bias was not a new experience for her—she had also been the sole female architecture student during a previous year at the Art Institute of Chicago—her male counterparts in Paris were clearly unable to accept a talented, un-intimidated female in their midst. She would soon return to the United States, launch a prolific career as one of Kansas City’s most innovative architects, and come to be remembered as a pioneer among professional women. 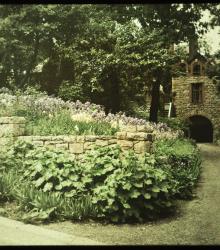 An autochrome photograph of iris flowers at the north entrance to Inghram D. Hook's residence. Hook was a Kansas City lawyer and his wife Mary Rockwell Hook was architect and designer of the house.