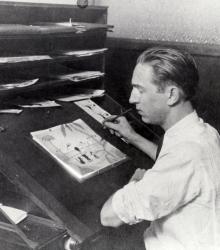 Born in Chicago, Illinois, in 1901, Walter Elias Disney moved with his family to Marceline, Missouri, at the age of five. In 1910 or 1911 (sources differ), the Disney family moved to Kansas City, where Walt helped his father and brother deliver Kansas City Star newspapers at 3:30 a.m. Disney and his friends created "Laugh-O-grams," which were very short silent animation clips that complemented feature films at the Newman Theater in Kansas City, and by 1922 he opened his first animation studio on the second floor of the small McConahy Building on 31st Street.