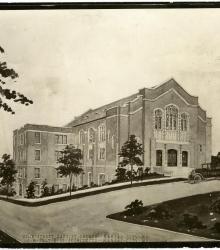 Daniel Arthur Holmes was born the son of slaves in Randolph County, Missouri, in 1876. His family moved to Macon, Missouri, after being freed at the end of the Civil War. Holmes, a third generation preacher, answered the call to preach at age 17 and was ordained in 1901. Holmes began his career in the greater Kansas City area in 1914 as pastor of Metropolitan Baptist Church in Kansas City, Kansas. He later took over leadership at Vine Street Baptist Church at 1835 Vine and soon led the church in an expansion program. By 1927 the church was built at its current location at 25th Street and the Paseo and renamed Paseo Baptist Church. Holmes served as pastor for 46 years—from 1921 to 1967.