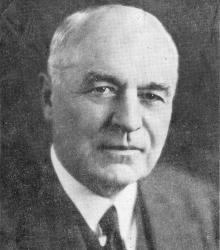 Joseph “Joe” Shannon presided over Kansas City’s Northside Democratic Party from the early 20th century to 1930, after which he relocated to Washington, D.C., for a 14-year tenure as a U.S. Congressman. Shannon’s political career was marked by his Jeffersonian Democratic views and his tenuous relationships with brothers James and Tom Pendergast.