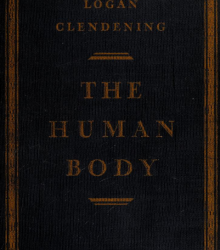 A physician and author who sometimes blurred the line between rake and raconteur, Logan M. Clendening became a folk hero in February 1939, when after repeated diplomatic attempts to silence a jackhammer in use on a construction project near his home at 56th and State Line, he donned a suit, Homburg hat, kid gloves, and button-hole carnation, strolled calmly out to the machine, and attempted to destroy it with an axe.  He was arrested and served several hours behind bars. Jackhammers like the one he attacked had been in frequent use on unpopular sewer projects sanctioned by political machine boss Tom Pendergast, and many Kansas Citians cheered the doctor’s symbolic blows against a corrupt City Hall.