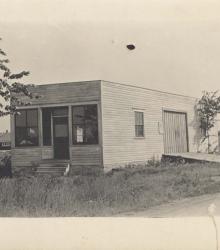 Photograph of the Flatiron Building at 8024 Santa Fe Drive in Overland Park. The one-story building served as a commercial space, and in the late 1920s, became the home of the Overland Park Herald newspaper. A two-story house in the background of the image was occupied by Hoge Funeral Home at the time of the photograph.