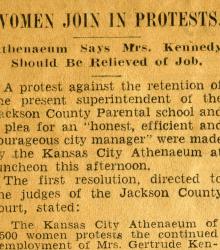 Through the Woman’s City Club, Women’s Forward Kansas City Committee, and other civic organizations, women in Kansas City exemplified the principles of benevolence, reform, and equality in their campaign to oppose the Pendergast machine and eventually replace it in a “clean sweep.” Wielding brooms as potent props symbolizing the clean-up of corruption, and with the campaign slogan, "Ballots and Brooms vs. Bosses and Bullets," the women reformers joined the United Campaign Committee in 1939-1940 to champion an amended city charter and a slate of reform-minded candidates for public office.