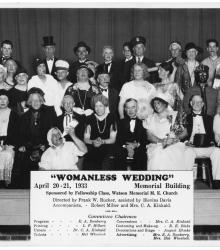 Photograph of the cast of "Womanless Wedding," the all-male production performed at Memorial Building in Independence, Missouri on April 20 and 21, 1933. The cast was made up of local civic leaders including Judge C. Jasper Bell and Independence Mayor Roger Sermon, and the production was directed by Frank W.