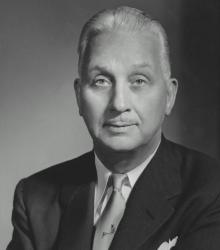 Elmer F. Pierson, who, along with his brother John, would go on to found the Vendo company and dominate the world's soft drink vending machine industry, was born on August 27, 1896. In addition to its achievements in the vending industry, Pierson's company made significant contributions to America's war effort during World War II and dabbled in new innovations in other, unrelated industries.