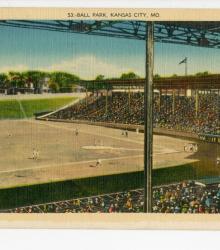 George Edward Muehlebach assumed leadership of the Muehlebach Brewing Company in 1905 at the young age of 23, when George Muehlebach, his Swiss-born father and founder of the brewery died. A Kansas City promoter, he built the Muehlebach Hotel at 12th and Baltimore in 1916, became a bank director, board member of Research Hospital, and a member of several prestigious clubs.