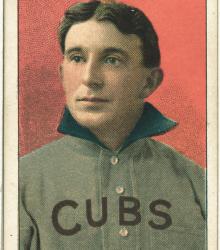 Arguably one of the most overlooked players from the early days of baseball, Johnny Kling, a native of Kansas City, was the game’s premier defensive catcher in the first decade of the 20th century and a key member of the great Chicago Cub teams of 1906 to 1910. Nicknamed “Noisy” for the constant stream of chatter he maintained behind the plate, Kling was admired by teammates and opponents for his ability to defend, handle pitchers and engage in the mental aspects of the game during the “dead-ball era.” Kling returned to Kansas City after his retirement from baseball and pursued a successful career in business, primarily real estate. In 1933 he bought the minor league Kansas City Blues and immediately eliminated segregated seating at Meuhlebach Field, which was also the stadium used by the Kansas City Monarchs of the Negro Leagues.