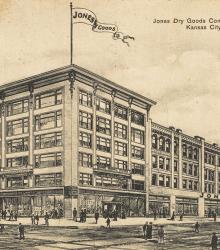 J. Logan Jones once recalled in an interview how he raised $400 to start his first retail operation. As a teen in southern Illinois, Jones purchased calves at a low price from several farmers in the area whose poor circumstances that year allowed them to winter only their hardiest stock. Jones fattened and resold the animals at a profit, hitting upon the strategy of “underbuying and underselling” to which he later attributed the great success of his dry goods and department stores in Illinois, Kansas, and Kansas City, Missouri.