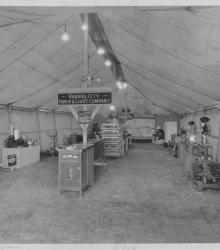 Photograph of a Kansas City Power & Light Company exhibition tent at the Johnson County Fair in the early 1930s. The tent is filled with electric farm equipment and promotional signs. An electric milking machine is displayed on the left side of the image wth a sign that reads "Do you know? 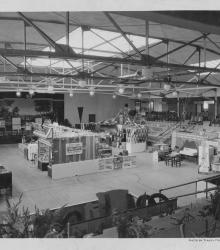 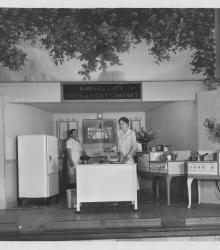 Photograph of two women standing in a demonstration kitchen on the Shawnee Mission Rural High School gymnasium stage as part of the Johnson County Fair in the early 1930s. The kitchen, bearing a Kansas City Power & Light Company sign, includes a refrigerator or ice box, a stove, and a curtained window. 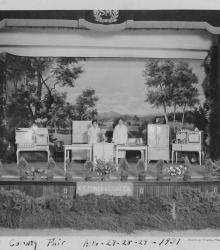 Photograph of a Johnson County Fair cooking demonstration set up on the stage of the Shawnee Mission Rural High School gymnasium's stage in August 1931. Two women, dressed in white, stand behind tables and an electric stand mixer. Behind them are appliances including stoves and ice boxes. 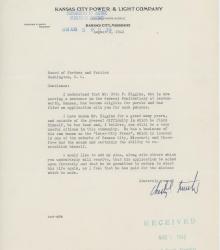 Letter from Chester C. Smith, president of the Kansas City Power and Light Company, regarding the parole of Otto P. Higgins, Inmate #55996-L. Smith writes that he believes Higgins "has been and ...