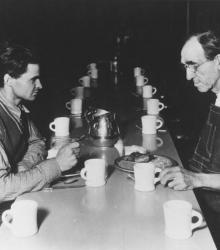 In October 1894 in the midst of a nationwide depression, Edwin Brigham, a 20-year old printer from Kirksville, Missouri, stepped off a train in Kansas City hoping to find work. Little did he know that this would mark the beginning of a 52-year career in social service helping thousands of homeless men and women in Kansas City. From 1898 to 1950, “Terry” as his close friends knew him, was superintendent of the Helping Hand Institute. Housed in a former saloon at 4th and Main, the institute provided food, lodging, and work for homeless and destitute men on the city’s North End.