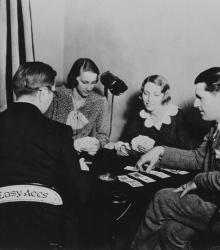 Jane and Goodman Ace were partners in creating laughter. The team started a local daily radio show in 1930 that was so successful that it was picked up CBS and NBC and broadcast across the country. Goodman moved on to become one of the highest paid comedy writers for many of the big name stars of radio and television.