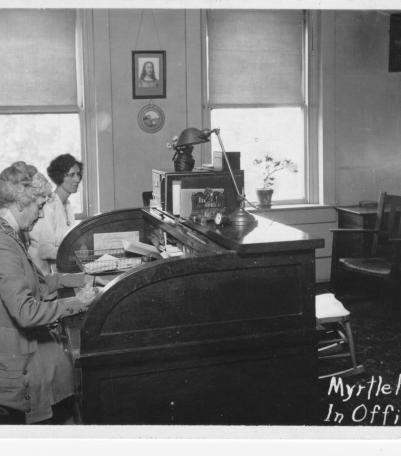 Photograph of Myrtle Fillmore seated at a desk in her office with another unidentifed woman next to her. Mrs. Fillmore was the co-founder of Unity School of Christianity with her husband Charles.

Author:
Daniel Coleman
Formerly Missouri Valley Special Collections
Unity—the name came to Charles suddenly during a meditative state in 1891—was neither a church nor sect, but carried a message that physical health and material wealth were the natural states intended for humanity by God. The Fillmores encouraged unity of all denominations, of science and religion, of God and man, and of people with one another. During the 1920s, the Fillmores extended the reach of their message via the new medium of radio, eventually purchasing station WOQ. Unity also began acquiring land southeast of Kansas City, near Lee’s Summit, Missouri; the tract came to encompass some 1400 acres, later incorporated as a village.
KANSAS CITY PUBLIC LIBRARY | DIGITAL HISTORY
Civil War on the Western Border: The Missouri-Kansas Conflict,1855-1865.
The Pendergast Years, Kansas City in the Jazz Age & Great Depression.
KC History, Missouri Valley Special Collections at the Kansas City Public Library.