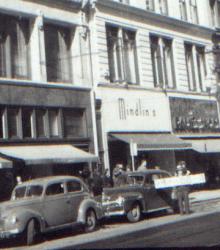 Rose Mindlin's handmade hats were so admired that other women begged her to make theirs. When she could no longer keep up with requests, she hired help and opened a shop near 12th and Troost. That was a risky venture in 1904, but Rose was a risk-taker. Besides, she could work and keep an eye on her three boys, since the family lived at the back of the store. By 1918 she opened a new store at 3221 Troost. In 1922 her son, Harold, became her partner. By the time her husband died in 1923, her business was established enough that it provided job security for her three sons. The store expanded its line to include clothing, and reportedly became the first store outside downtown to offer stylish ready-to-wear women's apparel.