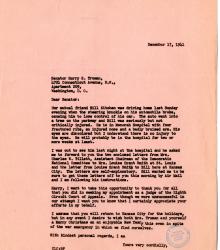 Letter from Charlie L. Carr to Senator Harry S. Truman in which Carr informs Truman that William A. Kitchen had been involved in an accident and is "seriously but not critically injured". He then thanks Truman for his attempt to place Carr as judge of the Eighth Circuit Court of Appeals.