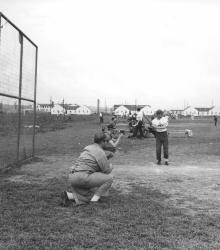 Photograph taken between 1935 and 1943 of a baseball game at the North American Aviation Athletic Field, Fairfax, Kansas City, Kansas. The game was part of a program supported by the Works Progress Administration. 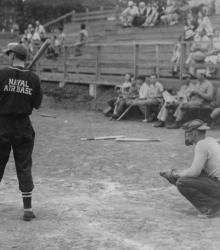 Photograph taken between 1935 and 1943 of a baseball game between the Army and Navy at Kensington Park, Kansas City, Kansas. This activity part of the Works Progress Administration. 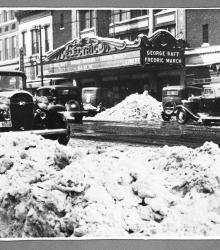 Circa 1930's photograph of the Electric Theater, 546 Minnesota Avenue, in Kansas City, Kansas. It was opened in 1922, closed in 1969, and demolished in 1976. This vantage point faces northwest toward's the theatre's entrance. 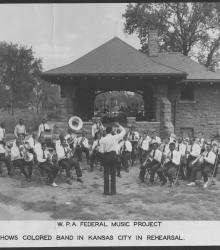 Photograph taken between 1935 and 1943 of an African American band rehearsing in a park in Kansas City, Kansas. Such bands, and their public performances, were an important part of the Works Progress Administration's Federal Music Project. 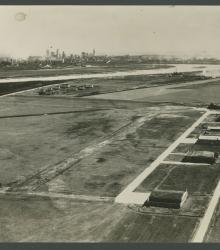 1930's photograph of the Fairfax Airport in Kansas City, Kansas. The airport was active between the years 1921 and 1985. 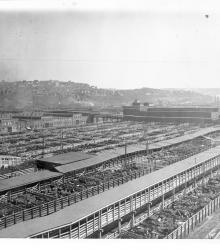 1920's photograph of a portion of the cattle pens at the Kansas City Stockyards in Kansas City, Missouri. The facility, established in 1871 along the Kansas River and the Kansas Pacific and Missouri Pacific Railroad tracks, became one the leading livestock markets in the United States. 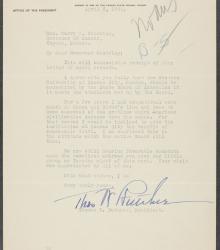 Letter from Thomas W. Butcher, President of the State Teachers College, Emporia, Kansas to Kansas Governor Harry H. Woodring. Butcher agrees with Woodring that Western University should be given accreditation if it meets the standards imposed.