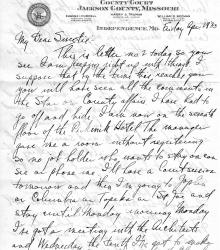 Letter from Harry S. Truman at the Pickwick Hotel in Kansas City, Missouri to his wife Bess in Biloxi, Mississippi. In this letter, Truman updates Bess on the public's reaction at Truman laying off over two hundred county workers: "I have had to go off and hide. I am now on the seventh floor of the Pickwick Hotel. 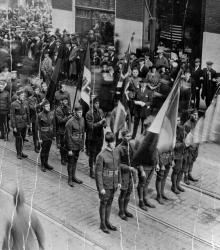 Harry S. Truman and the 129th Field Artillery in front of the Muehlebach Hotel during the November 1921 Armistice parade in Kansas City, MO. Truman is in uniform, on the far side of the street, behind the man in the suit. This photograph was taken looking southeast on 12th Street just west of Baltimore Avenue. 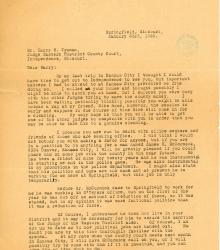 Letter from Ralph Emerson Truman to his cousin Harry S. Truman in which Ralph inquires if Harry could find employment for his friend James H. McCormick of Kansas City. He states, "Of course, I am not up to date as to how political jobs are handed out." 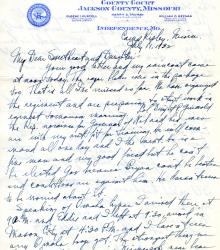 Letter from Harry S. Truman at the Camp Ripley near Little Falls, Minnesota to his wife Bess in Independence, Missouri. In this letter, Truman updates Bess on his time since his arrival and about the contraband liquor available at Camp Ripley and Mason City, Iowa.