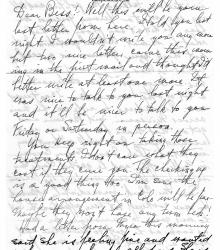 Letter from Harry S. Truman in Washington D.C. to his wife Bess in Independence, Missouri. In this letter, Truman updates Bess on his visit with Franklin D. Roosevelt and their discussion about Lloyd C. Stark: "Went to see the President about a bill and he insisted on talking Mo. politics and telling me what a funny Governor we have. 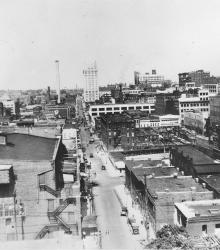 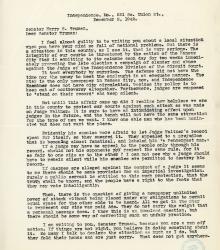 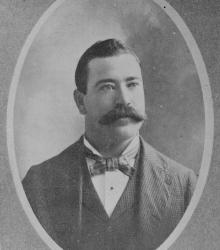 Portrait of Thomas J. Pendergast around 1900. From the book, "Independence As It Is." 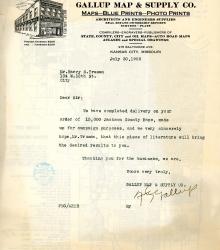 Letter from Gallup Map & Supply Co. President F. E. Gallup to Harry S. Truman. The letter serves as confirmation of delivery of 15,000 Jackson County maps to be used for Truman's judge campaign. The back of the letter includes a 1916 sample map of Kansas City, Missouri.

Confidential Petition from J. C. Williams to Bryce B. Smith 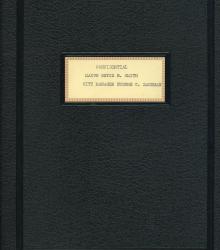 Petition by J. C. Williams to Mayor Bryce B. Smith and City Manager Eugene C. Zachman for approval or rejection. Williams calls for the formation of the Municipal Employees Democratic Club, composed entirely of municipal employees, so that they may be dissociated with the Jackson Democratic Club (the Pendergast Machine). 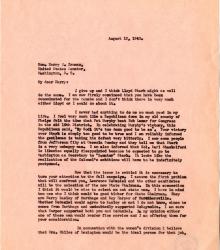 Letter from William A. Kitchen to Senator Harry S. Truman in which Kitchen discusses Truman's victory as Democratic candidate for re-election in the Senate. He then provides suggestions for Truman's fall campaign strategy. 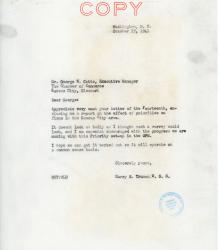 Letter from Senator Harry S. Truman to Executive Manager of the Kansas City Chamber of Commerce Geroge W. Catts. Truman confirms receipt of a Kansas City manufacturing report sent by Catts and Truman expresses his surprise in the outcome of the report. 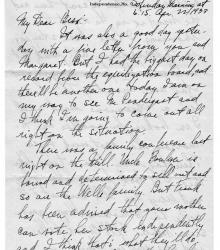 Letter from Harry S. Truman in Independence, Missouri to his wife Bess in Biloxi, Mississippi. In this letter, Truman updates Bess on personal matters after commenting that he "had the biggest day on record before the equalization board, and there'll be another one today. I am on my way to see Mr. 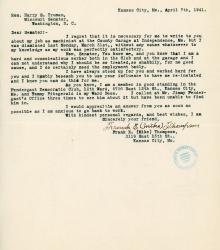 Letter from Frank E. Thompson to Senator Harry S. Truman in which Thompson informs Truman that he had been let go of his job as a machinist without cause. After attempting to contact James M. Pendergast, he asks for Truman to use his influence to prompt his reinstatement as machinist. 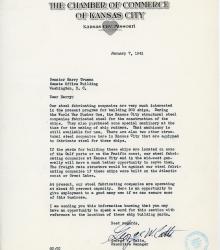 Letter from Executive Manager of the Kansas City Chamber of Commerce Geroge W. Catts to Senator Harry S. Truman. Catts informs Truman that Kansas City structural steel companies are currently at 60% capacity and could be utilized to aid in the construction of 200 aquatic ships requested by the federal government.

From Rose A. Conway to James M. Pendergast 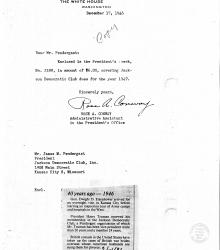