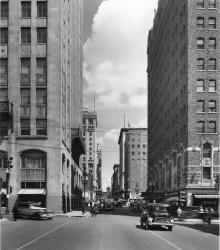 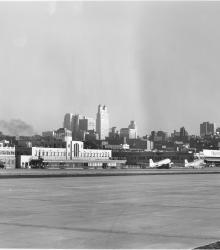 Photograph with view of the terminal building at Municipal Airport, looking toward the southeast with the Kansas City skyline in the background. There are TWA airplanes on the ground and the Transcontinental & Western Air, Inc. (TWA) airport hanger building is in view. 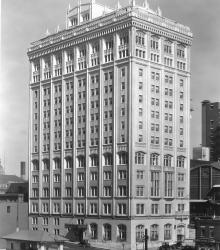 Photograph with full frontal and side view of Kansas City Club building looking northwest from 13th Street and Baltimore Avenue. A small gas station is visible on the south side of 13th Street. 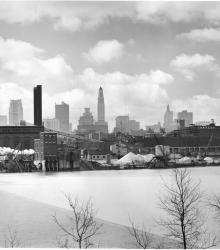 Photograph with view of the downtown skyline from just north of the Missouri River. 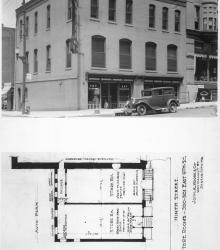 Photograph of the back end of the Victoria Hotel at the northeast corner of 9th Street and McGee Street showing K & P Cleaners as a tenant in the building. Floor plan of basement storage areas is on same sheet. 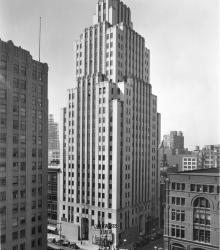 Photograph with frontal view of building at the southwest corner of Grand Avenue (presently Grand Boulevard) and 11th Street. The Emery, Bird, Thayer Building (right) and Lathrop Building (left) are also visible. Corner of roof and sign of Browning, King and Co. shows in foreground. 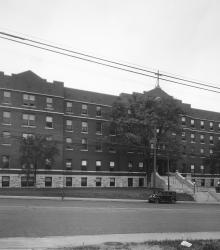 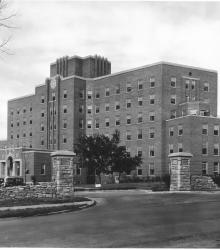 Photograph with full frontal and partial side view of Menorah Hospital, located at northeast corner of Rockhill Road and 50th Street. 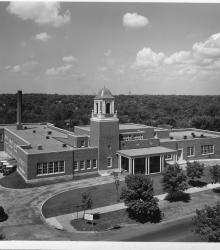 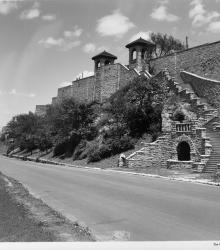 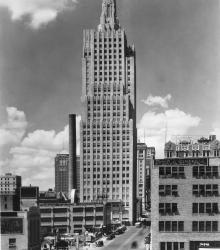 Photograph looking north up Baltimore Avenue from near 16th Street. The Kansas City Power and Light Building is in full view in the center of the photograph. The sign for the President Hotel is also in view on the right. 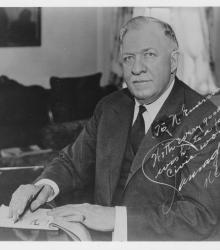