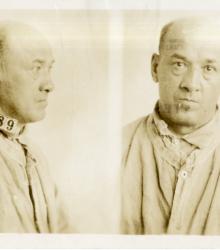 Mugshot of Frank "Chee Chee" DeMayo, Inmate #31989. DeMayo was sentenced to time in the U.S. Penitentiary at Leavenworth after a conviction of conspiracy to violate Prohibition law. 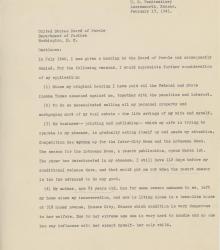 Letter from Otto P. Higgins, Inmate #55996-L, requesting further consideration of his denied parole request, and noting that since that time he has paid his back taxes by selling off or mortgaging his property, and that his printing business and elderly mother require his attention. 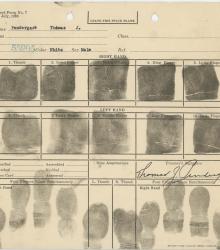 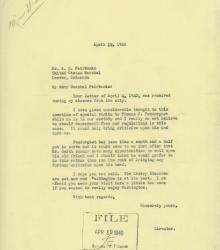 Letter from James V. Bennett, Director of the Bureau of Prisons, to U.S. Marshal A. D. Fairbanks regarding Tom Pendergast, Inmate #55295. In it, Bennett writes that he does not believe they should depart from regulations to allow "special visits" from a Mr. 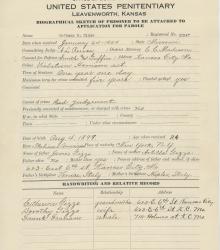 Biographical sketch of Anthony R. Gizzo, Inmate #20547, to be attached to his application for parole, including family information and listing his legal representation. Gizzo was sentenced to one year and one day in the U.S. Penitentiary at Leavenworth on drug charges. 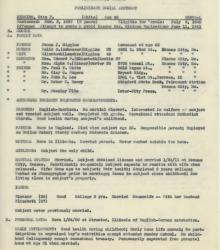 Preliminary social abstract for Otto P. Higgins, Inmate #55996-L, recording his family history and employment and economic background. Higgins, the former director of the Kansas City Police Department, was sentenced to two years in the United States Penitentiary at Leavenworth on charges of income tax evasion. 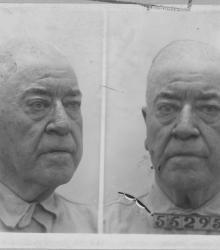 Mugshots of Thomas J. Pendergast, Inmate #55295, contained in a folder noting his conditional release from prison on May 30, 1940. Pendergast, known for his powerful Kansas City political machine and ties to organized crime, was found guilty of income tax evasion in 1939 and sentenced to 15 months in the U.S. Penitentiary at Leavenworth. 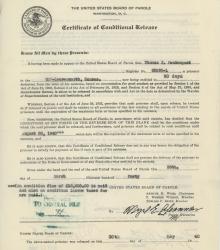 Certificate of Conditional Release for Tom Pendergast, Inmate #55295, stating that Pendergast is receiving a reduction of 90 days from his original sentence on the condition that a fine of $10,000 and past due income taxes are paid. The document also lists Lewis J. 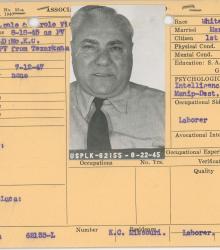 Mugshot and prison record of Giuseppe "Joseph" DeLuca, Inmate #1742-TT/#62155, noting his transfer from the Federal Correctional Institution in Texarkana, Texas, to the United States Penitentiary in Leavenworth, Kansas, in August, 1945, along with other information. 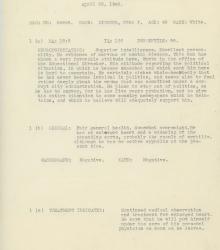 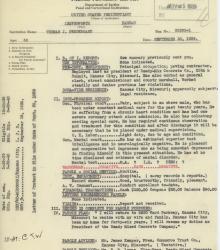 Parole progress report for Tom Pendergast, Inmate #55295, which includes details about his physical and psychological health, plans for life after parole, and listing his parole adviser as James Kemper. 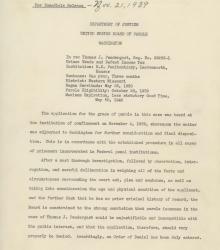