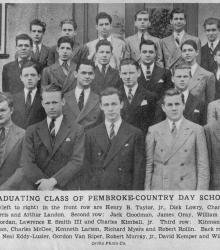 Clipping entitled "Graduating Class of Pembroke-Country Day School" from May 1937 showing the graduates on the steps to the main entrance of the school. The caption states, "Shown (left to right) in the front row are Henry B. Taylor, jr., Dick Lowry, Chandler Smith, Stephen Harris and Arthur Landon. 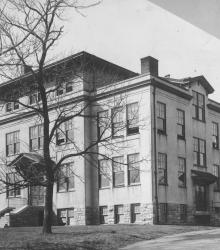 Exterior of the Administration Building of the Country Day School, later called Pembroke Country Day School. It was once located near the southeastern corner of 51st Street and State Line Road. The ground on which this building stood is now the quadrangle of the Pembroke Hill School - Ward Parkway Campus.