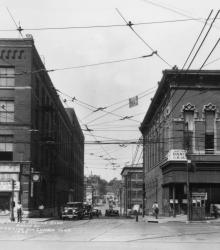 Street scene showing the Kansas City Public Service Company Building (also known as the Kansas City Railway Company or K.C. Rys. Co. from 1914-1925) on the left. This building was located on the south side of 15th Street (now Truman Road) between Grand Avenue (now Grand Boulevard) and Walnut Street.

From U. A. McBride to Sam Hargus 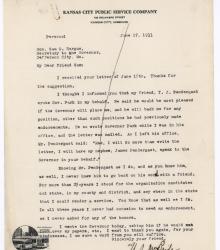 Response letter from U. A McBride to Governor Park's secretary Sam Hargus in which he emphasizes his affiliation with Tom Pendergast and seeks a job.

From William A. Kitchen to Lloyd C. Stark 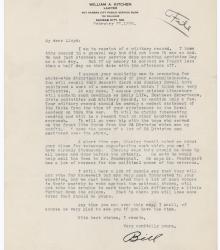 Letter from William Kitchen to Lloyd C. Stark about Stark's campaign for Missouri governor, his military record, and veterans issues.